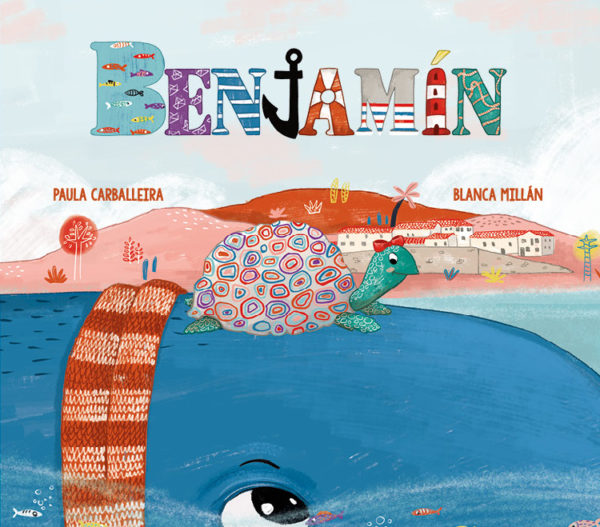 Benjamin is a sperm whale, the only one of his species in the waters where he lives. Nonetheless, he really wants to be a dolphin. He watches the dolphins jumping and singing and wishes he could be like them. But when he jumps, he makes such a splash that he floods the beaches where the seagulls nest, much to their disgust. The dolphins laugh at him and swim away too fast for him to keep up. Benjamin’s only friend is Minerva, a turtle, who appreciates this unique creature for who he really is.

One day Benjamin feels so lonely that he becomes «sick with sadness». He stops swimming and lets the tide take him towards the shore, where he will inevitably get beached and die. Minerva realises what’s happening and quickly tells the other animals they need to rescue him: «if he dies, we’ll have no sperm whales left. We sea turtles are few, but Benjamin, Benjamin is unique».

Suitable for reading to children of around 3-6 years old, this is a well-told story about diversity and friendship. Benjamin knows that he is different from the other sea creatures, and he longs to be part of the dolphins’ family because he has no family of his own. The dolphins reject him at first because he is different, but his friend Minerva understands him and encourages the other sea creatures to appreciate his uniqueness. Benjamin becomes part of the dolphin’s family, but that doesn’t mean he must be just like them; this shows children the importance of being themselves and celebrating differences. This book also shows children how feeling lonely and different can make us feel sad and depressed, encouraging them to be compassionate to others who might be feeling this way.

Although this story has some serious moments, the general effect is one of warmth and joy, with bright, attractive illustrations…

In conclusion, this is a moving and well-told story about inclusion and diversity which will be fun to read to young children and which will get them excited about some of the incredible animals that live in the sea.